Round 8 of the FSR World Championship took place at the Hockenheimring, a track famed for its fast flowing nature. Cut down from the behemoth 6.8km track for safety reasons in 2001, the newer 4.6km track offers high speeds as well as testing mid-speed corners.

Drivers will have to be patient through the Mercedes and Sachs stadium sections as applying the throttle too early would see valuable time lost.

The kerbs around the track are unforgiving and punish drivers who try to push their luck. Turn 1 is a difficult corner to get right. Too little inside kerb and you’ll run wide on the exit. Too much and you risk a corner cut penalty. And getting it right 67 times will be a true test of consistency.

The best chances for overtaking are into the hairpin after the long curved ‘straight’ and into the Mercedes stadium section.

Your top 10 in qualifying were:

The race start was dry with only a 10% chance of rain.

As the lights went out, Maguire got a good start off the line and D’Alessandro couldn’t find a way past. Patel tucked in behind them as they headed towards Turn 1. Martin Gosbee ran wide into Turn 1 and lost time. Meanwhile, into the hairpin, D’Alessandro tried a move around the outside of Adam Maguire. He ran out of room on the outside of the exit. D’Alessandro’s exit was compromised and Patel saw the opportunity to slip past into the Mercedes stadium section and into second place. On lap 2, Stefanko overtook Masciulli in the Mercedes stadium section for forth place.

Adam Maguire started to build a one second gap to Patel by lap 3. van Buren and Brljak fought for position into Turns 2 and 3 and as they headed towards the hairpin, van Buren managed to hold off Brljak with some good defending. Meanwhile, Gosbee and Valeriano made contact just before the Mercedes stadium section, Gosbee is spun round but rejoins the track in last place. Hoyer, who started on the Prime tyre, overtook Saxen for P9 into the hairpin on lap 4. 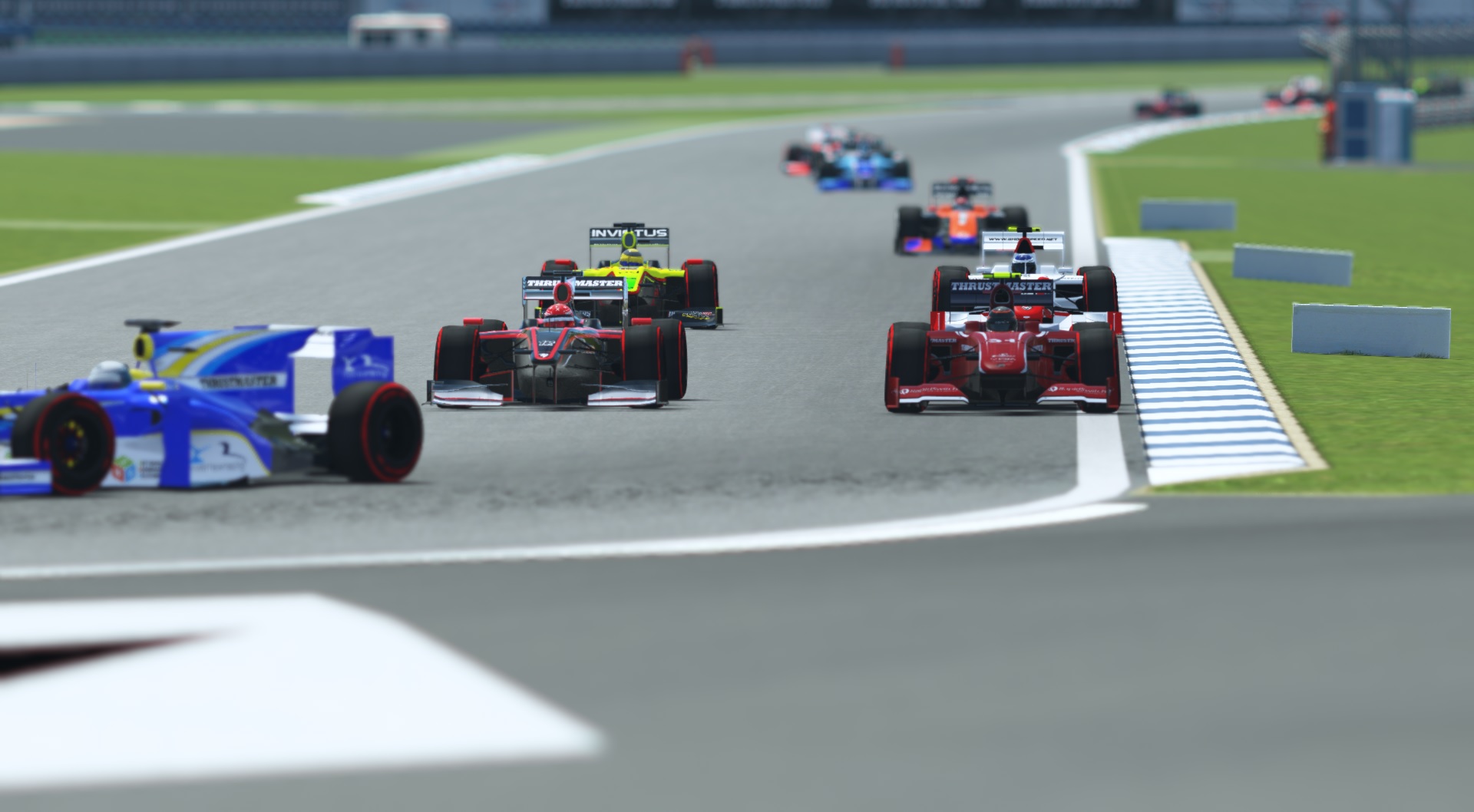 On lap 6, Bekker overtook Kappet into the hairpin, but Bekker made a mistake in the Mercedes stadium section and lost a front wing endplate after hitting Luke Maguire in the sidepod whilst Bekker was trying to regain control of his car.

Gosbee on Option tyres, started making his way back through the field as he overtook Hamnett into the hairpin for P15 on lap 9. On lap 10, he would then overtake Kappet in the same place and move up to P14. Gosbee was on a charge. Hoyer in P9, the first of the Prime tyre runners was 15 seconds behind Adam Maguire and all eyes were on him to see what he could do with the alternative strategy. At the front, Adam Maguire’s gap to Patel was 1.2 seconds.

On lap 12, a battle started to take shape between Bekker and Kappet. Bekker tried a move on Kappet into the Mercedes section after a good exit from the hairpin but could not make it stick. He tried again on lap 15 in the same manner but he just could not make a move happen. 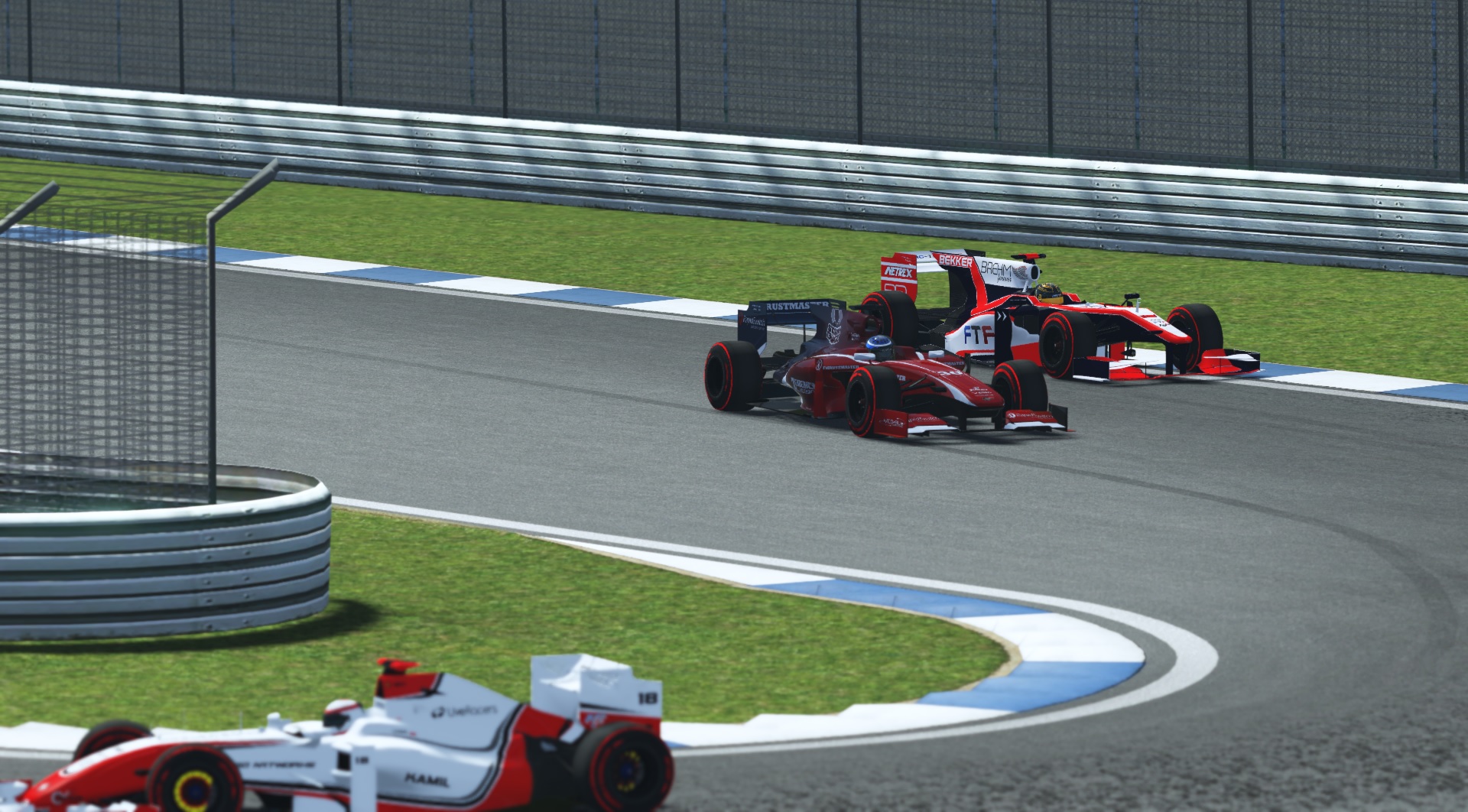 Luke Maguire ran wide and lost the back end at Turn 1 on lap 16. He lost his front wing made his way back to the pits. He pitted and rejoined in last place and would carry on with slight damage to his suspension and steering column.

On lap 17, Lopez became the first retirement of the race. He lost the back end at Turn 1 but he wasn’t as lucky as Maguire on the lap before. He headed into the wall, rear first, and lost his right rear tyre.

van Buren was the first driver to pit. He pitted on lap 19 and rejoined on Prime tyres in P13. Meanwhile, D’Alessandro becomes another victim of Turn 1. He hit the wall on the right hand side and retired from the race due to suspension damage.

The leader Adam Maguire pitted from the lead on lap 20. Patel stayed out to try the overcut. Maguire rejoined on Prime tyres in P6. A lap later, Patel pitted and put on the Prime tyres. Patel rejoined in front of Maguire making the overcut work. Hoyer would take the lead of the race and the focus turned to Hoyer and Valeriano, as they were running on the Prime tyres and yet to make a stop. Masciulli and Brljak also pitted on the same lap and they would both rejoin the track on Prime tyres.

On lap 23, Hoyer set his personal best lap of a 1:17.176, and kept a 1.2 second lead to Valeriano. He was 2.5 seconds ahead of Patel, in third place. Adam Maguire came under pressure from John-Eric Saxen, as Saxen set his personal best lap. van Buren made a mistake just before the Sachs stadium section. He ran wide at the start of sector 3 and lost the car across the gravel. He would recover the car and rejoin in eleventh place.

Lap 25 and Valeriano pitted from second place but he slightly missed his pit box. He rejoined in ninth place on the Option tyres. Saxen also pitted and rejoined in P12 on Prime tyres.

Hoyer still led on lap 27 but he gap was falling with Patel is closing in on him by around three tenths a lap. At the end of the lap Hoyer pitted and Patel would retake the lead. Hoyer put on the Option tyre and rejoined in sixth place.

Adam Maguire was slightly falling behind Patel but he continued to push. Both drivers trading lap times but the gap was 2.3 seconds. Maguire crossed the line and took four tenths out of the lead. Stefanko was holding third place, 7.2 seconds away from Patel and he was matching the leaders’ pace.

On lap 31 van Buren took a trip off-road and into the barriers. He lost the car in the Sachs stadium section and lost his front and rear wing. He pitted in but he decided not to rejoin the race.

Gosbee tried a move on ninth-placed Saxen around the outside of the hairpin on lap 34. Saxen closed the door but Gosbee tried again into the Mercedes stadium section around the outside and made the move stick! A wonderful pass and great driving from both drivers! Gosbee moved into P9. On the next lap Bekker tried a move on Saxen into the hairpin down the inside and made it stick. Bekker moved up into tenth place.

Valkeejarvi got into trouble. It looked like a computer issue as he entered the final turn. There was no input on the throttle, brake or steering and he headed into the barrier. His computer decided it was a good opportunity to minimize rFactor 2 and go to his desktop. He lost his front wing but suspension damage put him out of the race. And on lap 37, Stefanko had trouble too. He disconnected from the server from third place!

Bekker in P13 hounded Mlynek. He tried around the outside of the hairpin and made the move stick. At the front, Patel was opening up the gap to 4.3 seconds. But on lap 44, Maguire was able to take 1.1 seconds out of the lead in a single lap.

On lap 45 Masciulli pitted from P3 and he rejoined in P6 on Option tyres. Hoyer and Valeriano couldn’t seem to keep the pace on their option tyres as their pit window opened. Valeriano pitted from P7 to put on another set of Option tyres to go to the end. He rejoined in P10. A lap later, Patel pitted from the lead. But there was trouble in the pit lane as Luke Maguire made contact with Patel in the pitlane. Despite this, Patel rejoined in fourth place behind Hoyer, who had to stop again. All eyes were on Maguire.

Maguire pitted from the lead on lap 47. Maguire put on Option tyres, but rejoined behind Patel. The gap between them had come down thanks to Maguire performing the overcut. Brljak and Hoyer also pitted. Brljak rejoined on the Option tyre in fourth place, behind Masciulli. Hoyer rejoined in P5 on Options.

Maguire set the new fastest lap of the race as he closeed in on Patel, a 1:16.345. The battle for fifth place between Hoyer and Brewer was starting to heat up. Hoyer ran slightly wide into Turn 1. Brewer had a look into the hairpin but decided to back out of the move. The battles for first, third and fifth were the battles to be watching!

On lap 53, the fast charging Gosbee found a way past Valeriano into Mercedes stadium section. Gosbee went around the outside of the hairpin and the two drivers were side-by-side into the Mercedes section. Valeriano backed out of the corner, which allowed Gosbee to take P7. In front of them, Brewer was pushing hard. He was closing in on Hoyer but he could not find a way past. 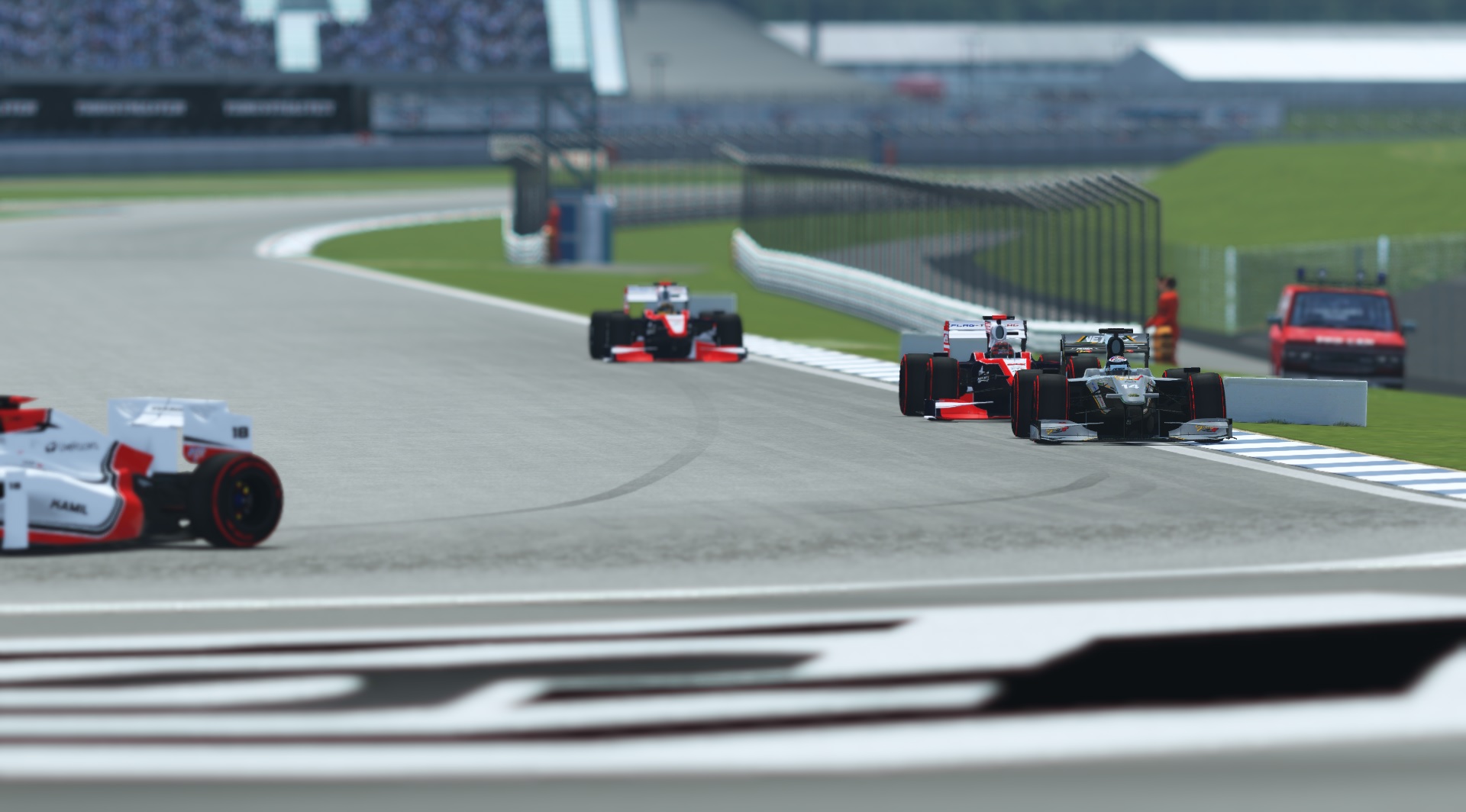 They’d been battling since the second pit window had closed, but Brewer managed to pass Hoyer for fifth place. Hoyer ran wide into Turn 1 and compromised his exit speed. Brewer went down the inside into Turn 2. Hoyer didn’t give up easily. He tried the switchback into the hairpin, but he could not get the power down. Brewer kept P5 and started to pull away from Hoyer.

Ahead of them, Brljak made a move on Masciulli into the hairpin for third place but Masculli muscled Brljak out of the corner and held on. Brljak would keep pushing and applying the pressure.

With six laps to go, the gap for the lead was under the one second margin. Brljak conserved a move into the hairpin on Masciulli by staying out of the slipstream. Patel and Maguire seemed to be matching each other for pace heading into the closing stages. Behind them, the battle for third was still going on as Brljak was still trying to pressure Masciulli into a mistake.

With 3 laps to go, Adam Maguire closed the gap to just seven tenths but on lap 66, Maguire would get wheelspin out of the hairpin and lose time on Patel. Brljak locked up going into the Mercedes section and he lost time on Masciulli.

Heading into the final lap, the pressure was on. Maguire was going all out to get into the slipstream and he was the closest he’d been to Patel all race. Behind them, Brljak looked for a move into the hairpin, but he took too much kerb on the outside and lost precious time.

And as they headed towards the line, Maguire did all he could, but Patel edged him out by only 4 tenths of a second! Behind them, Mascuilli held on for the last podium position from Brljak.

The provisional classification of the Top 10: 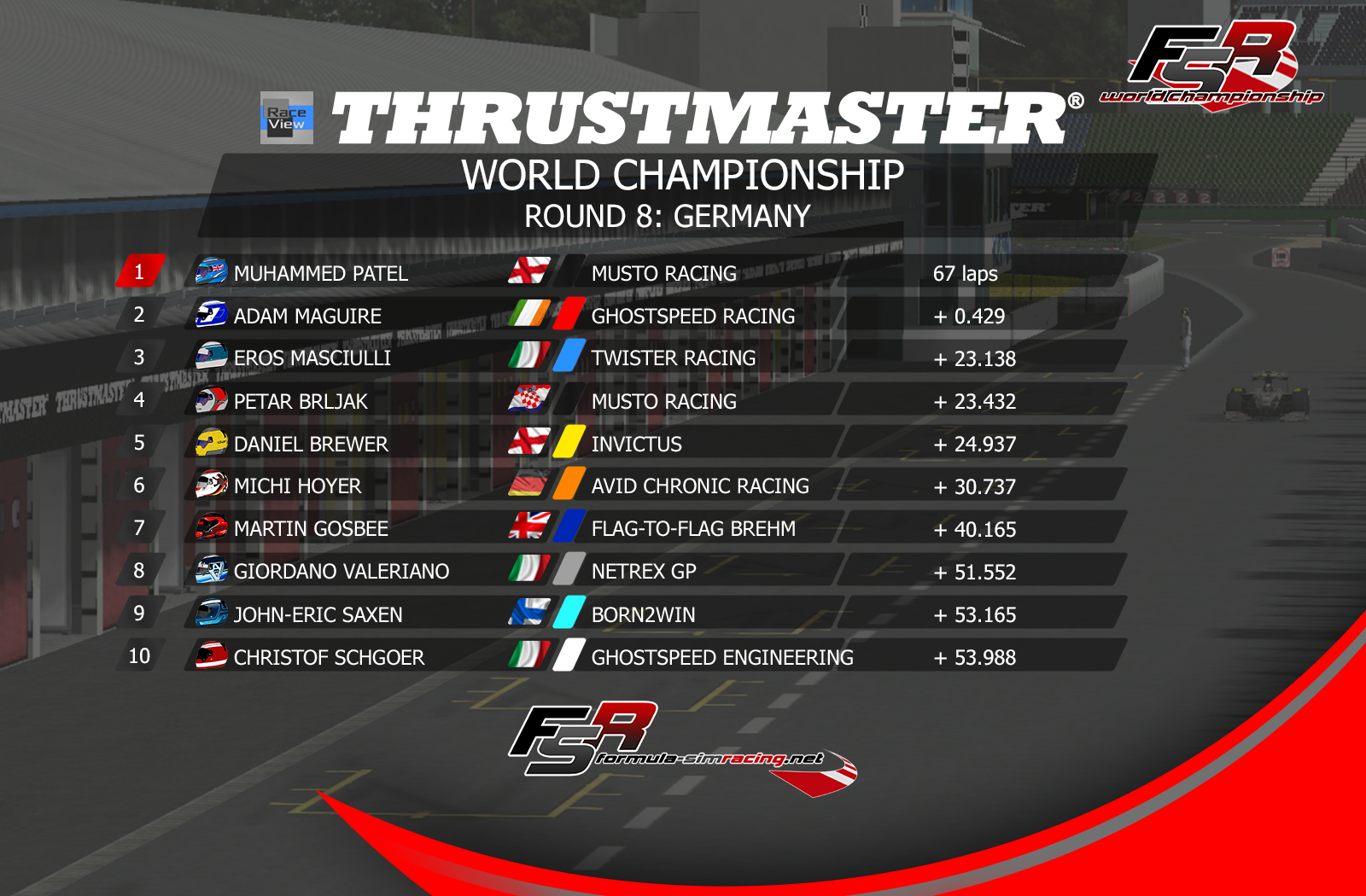 Full Drivers’ and Constructors’ Championship standings can be found here.

The next race is the French Grand Prix at Magny-Cours on June 18.